Instantly download our complete collection of Campagnolo Catalogs, Parts and Technical Manuals, Instruction Sheets and More! Painstakingly gathered and scanned page by page.  Nearly 4 Gigabytes and Thousands of pages.  Divided into 6 Separate Archives all included and available for download at one price.

Parts Catalogs show exploded diagrams of components with individual parts and manufacturer part numbers. Part numbers often cross-reference to items available on other components and are invaluable when trying to locate replacements. Exploded diagrams are essential to correct restoration and re-assembly.

Please visit the official Campagnolo website for all current and recent products.  Campagnolo is the best source for the most accurate information.

2006
Focus on more carbon in components and improvements in shifting and drive train.  The new 5.9mm Chains offered at different group levels are released.

2002
Daytona Group is re-named to “Centaur”, a name previously used for a Campagnolo off-road group.  The  use of the name “Daytona” was previously trademarked.

1998
Introduction of Next generation Ergo Levers.

1995
Introduction of Group names printed on componentry.  Introduction of Low Profile Cranksets. Both small (A4 folded) and large (A4) versions of this catalog are included.

1994
Sometimes considered the last (and best) year of the “C-Record” era.  This is the last year Components did not have the group name printed on them.  It is also the last year some components are still the original C Record design including the crankset, front derailleur, front hub and seat post.  It is also the FIRST year of Exa-Drive, with new chainrings, cassettes, Sachs chains, guided upper pulley and a ramp on the inner cage of the front derailleur.  Two different covers were made for the product catalog (shown).  They were identical inside.

1993
Introduction of rear derailleur with lower pivot on the inside. Late 1993 introduction of Record Dual pivot calipers (see addendum sheet). 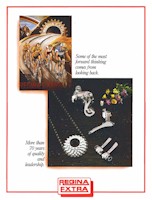 First and foremost, Throughout the early “C-Record” Era, Campagnolo was not offering a chain or an updated freewheel.   Regina’s offerings were usually the item of choice.  Campagnolo’s early index shifting systems are reputed to work best with Regina Syncro freewheels and asymmetrical chains.

Secondly, Regina’s failed attempt at a road component group shown in this catalog is representative of the final split between Campagnolo and Regina.  In this same time period, Campagnolo has begun stamping-out it’s own Cassettes, and re-boxing chains made in Germany (Rohloff) as their own.

1988 Dealer Parts Catalog (Catalog 19)
BONUS!  144 Page Dealer Parts Catalog!  Sometimes referred to as Catalog 19.  Catalog contains exploded assembly views of all components and detailed parts break-down and assembly.  The only known parts information available for late 1980’s equipment, these catalogs were individually serial numbered and distributed only to authorized dealers in a hardcover binder.  No further Parts Catalogs exist for years after due to a largely un-followed plan for Dealers to request updated pages as needed.

1986
Un-dated Brochures.  Delta Brakes are temporarily replaced with “dressed-up” the 50th Anniversary Super Record Brake calipers with a Cobalt-colored (“Cobalto” in Italian) gem instead of the gold badge on the center bolt.  Also, the Campagnolo name on the arm is filled with blue.  Only the Cobalto Calipers are offered at this time and are pictured in the Record flyer.  The next two catalogs both show Cobalto calipers and as such are probably both catalogs from 1986. Rims catalog also seems to be from this period. 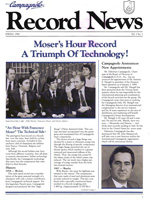 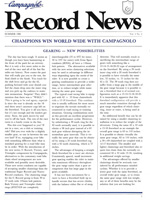 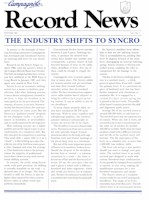 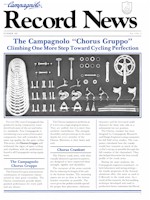 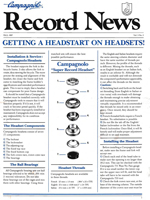 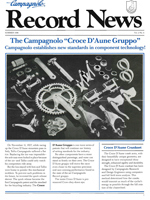 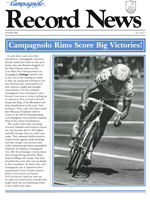 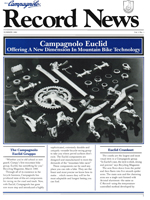 Undated
Undated Brochures.  Content of the white catalogs compared to 1986 catalogs seems to indicate these simply may not have been final revisions.  First use of the Campagnolo Alphabet, and the only year the alphabet character was placed above the Campagnolo Logo.

Catalogue n.18 bis
Addendum to Catalog 18 for the introduction of the new component groups.  This catalog dated December 1986.  There is an identical catalog dated April 1985.  This catalog identified the Record road components as the “Record Corsa group”, and the Track Components as “Record Track group”.   While the Italian word “Pista” was correctly translated to “Track”, the word “Corsa” was not translated to “Road”.  This possible “Typo” may be the basis for the nickname “C-Record”…. a name that never actually appears in product catalogs by Campagnolo.

1984
The Introduction of “C” Record, Victory & Triomphe equipment.  The Cerchio (rims) catalog is undated but has one page identical to a rims page in the main catalog, so it is assumed to be 1984 despite the use of the older world logo on the cover.

Catalogue n.18 – 1984
Dated December 1986,   There are identical versions from earlier printings with dates of December 1985 and May 1984.  Campagnolo Olympiad Engagement Calendar – detailing the spirit of the 1984 Olympics. 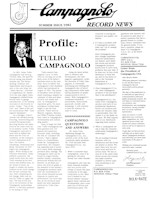 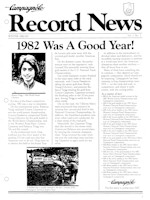 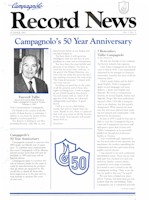 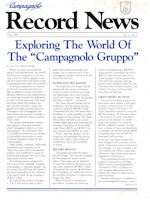 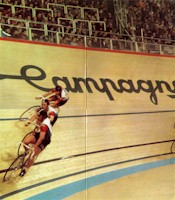 Regina Manuals – 1978
Regina?  If you’re wondering why this would be on Campagnolo pages, you were probably wearing diapers when these bikes were new.  Campagnolo had never yet ventured into cogs and chains.  Regina was our old Italian faithful and for most Vintage Campagnolo bikes probably still is today.

Catalog no.17a Supplement – 1977
Super Record updates.  Second one is a photocopy of a later edition that had a few extra pages.

Catalog no.17a – 1975
Actual Catalog 17a – plus a second Catalog containing the bicycle equipment pages from Catalogue No. 17a as reproduced in 1976 by the U.S. Authorized Distributor Hans Johnsen Company of Dallas, Texas. 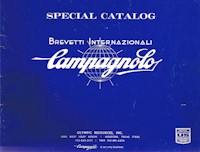 Catalogue no.17 – 1974
One of Campagnolo’s most comprehensive catalogs of the time at 96 pages.

Catalogue no.16 – 1968
Containing the Nuovo Record derailleur as part of the record group and pre-dating Super Record.

Catalogo no.13 – circa 1955
Scans taken in a manner to preserve original document.

Catalogo no.12 – circa 1953
Good reading in Italian!  Second document is the rare four language translation pages in French, English, Spanish and German.  Separate document in original size so you can print it on A5 pages.